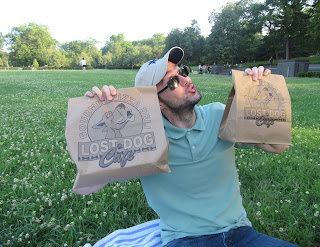 1.    We finally both fell asleep before ten
2.    I seriously tried to put on a navy shirt with my black pants
3.    I made molasses coffee and did not successfully foam the milk
4.    We finally went up the roof of the lovely tower in Will’s apartment building: a nighttime glance, new favorite quiet “restaurant” and new deserted “yoga studio”
5.    The Jeopardy tournament ended and the total confirmed that Will won, though not by a landslide
6.    I watched my first-ever episode of Fixer Upper
7.    Susie and I had our first “wine” night in the park and I realized that I had no wine available so had sweet green tea with vodka
8.   Celebrated the joyous news of two babies in two days!!!
9.    I got to plant tomato sprouts and they actually made it!!
10. We watched Becoming and Yes-Man
11. We ran out of baking powder. So many pancakes. So much joy.
12. Attained new levels of flatbread thinness
13. I returned a library book originally checked out in February
14. Was a hypochondriac AGAIN
15. We looked up hypothetical AirBnbs for three trips that may never happen
16. We watched Hamilton
17. I finally asked for my first time off since January
18. Free slurpee day was presumably canceled
19. We did our only indoor DC-friend hangout since mid-March
20. I witnessed a fancy outdoor barre class
21. Distant in-person church events started back and we made it to two
22. We attended our first drive-in picnic
23. Did my first run with a running friend and did not perish
24. We did DIY exercise in a gorgeous garden
25. We worked from a nearby plaza (with WiFi!!?) due to a fire alarm
26. We had our first Reese’s cup s’mores
27. The pool finally opened and it was the best
28. I realized I’m really not drinking enough water again
29. There were rolls of toilet paper—multiple—in the grocery store again!!

1.    We finally signed a darn lease
2.    Will borrowed a hand truck
3.    I finished the “Animal, Vegetable, Miracle” audiobook
4.    Will saw his brother’s build-a-computer pitch and the vegetables of his labors
5.    I dreamed that I was staying in the same AirBnb as Heidi Klum and Seal (RIP)
6.    We celebrated our new engagement with steaks, the best chimichurri ever, asparagus, fruit salad and sangria on the apartment rooftop with two friends
7.    Will found out that he would literally not be able to do just about anything (for a ~week) via Naval message
8.    We said “see you later” to my brother for nine months
9.    Our new lease warned us to “remain clam” in face of an emergency
10. Attempted to meditate at the pool while three children shrieked with joy and simultaneously also failed to delay beginning wedding planning for a month
11. We went kayaking on the Potomac with church friends on the morning of the 4th: one tradition that can continue!
12. Chick Fil A Cow Day and the Hawaii trip were canceled on the same day that a succulent gift started dying—somehow I can never get them right!
13. We both gave notice for our apartments
14. I finished going through all digital photos and movies since 2005ish
15. We met a ridiculously cute corgi puppy named Crouton
16. I watched distant fireworks from a roof for the first time and almost the whole skyline was filled
17. We enjoyed tamale pie, really good stir fry, froze, gazpacho, gumbo, flaming spicy broth, lots more pancakes, several breakfast sandwiches, Rice Krispies treats a la Marissa
18. We finally opened and finished the for-a-rainy-day Pumpkin Spice Joe Joes (Trader Joe’s ~oreos)
19. Made berry ice cream American flag version of nachos
20. Will let me win at cards once and I called him out
21. Received a virtual champagne toast
22. We made it to Will’s apartment rooftop once for each day since I discovered it
23. I learned of the existence of Will’s American flag tank top
24. Discovered a newly rainbow-painted cross walk near a very large Black Lives Matter billboard on my bike home to DC
25. I went to the gym three times in a week—so thankful to feel safe and get some things done while exercising
26. We learned of a nearby Alpaca farm and lavender field
27. We enjoyed another round of Sweet Fire Donna’s nachos after a bike ride
28. Pulled a fast one on both Will’s parents
29. Got more skin cancer prevention surgery
30. I finally opened THE big memory box and found some ridiculous photos of my early self
31. Will’s work switched back to an every-other-week in the office schedule
32. I resisted buying chocolate at the store...again!! But definitely polished off a good amount of hot chocolate powder the last month.
33. DJ, Rock-paper-scissors work buddy extraordinaire left
34. We started trying to guess dog’s names
35. I finally got to wear my new in the fall bathing suit in an actual pool!!
36. Started a spreadsheet of all our favorite people
37. I celebrated a virtual 30th birthday party and an early 60th on the same day
38. We made a fort and watched three episodes of Criminal Minds
39. We personally made 55 calls or messages about engagement! So fun and crazy
40. My phone seriously considered self-destructing the one week I didn’t have my personal computer...terrible timing
41. Oh and we went for a walk, got crepes to-go, watched dogs, played some cards, talked and rested a while and then we got engaged <3 span="">
Posted by Jpate2167 at 8:09 PM No comments: 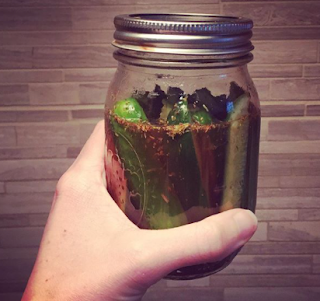 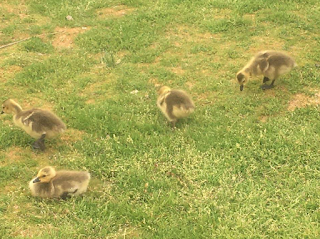 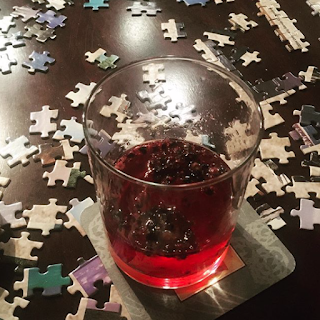 I am incredibly grateful for the opportunity to quickly transition to fully-working-from-home during this era of unexpected COVID-19 weirdness. I have verbalized never wanting to work from home more than “maybe one day a week”. Meanwhile, my roommate loves doing it every day as she has done for years. I even did college sociology research on the stress of living at your workplace, whether serving on housing staff or working from home. However, just like I’ve said for years that I could do vegetarianism but never veganism—and then found out that I am “highly reactive” to both eggs and all dairy—life sometimes turns out very different than you’d expect.

I mourn the news and am working to keep focused on what I can control as well as regularly sharing positive tidbits and moments with friends. At first glance, almost all of my personal default settings have been thwarted by this quarantine. I am extroverted, almost-never-sitting-still, definitely not a homebody, nearly always searching out and planning the next fun event, and I typically seek out nearly constant stimulation from either interesting media, creative opportunities and/or social interaction. I’ve read more than ten “work from home tips” blogs and wasn’t seeing these, so this is what I've been doing to help with Pandemic-induced working from home!

To work from home as well as possible, I incorporate these tips as much as I need to:

1. Start, break up or end the day by walking. Or, do all three! In the absence of commutes, we still need transitions, breaks and movement. The sunshine and bird twitters have been a special treat for me. While, like everyone, I wish this had never happened, I’m particularly thankful that this pandemic didn’t happen in the winter.
2. Switch up between essential oils or use a candle to create “new environments”. Pick different scents to help you celebrate a new day.
3. Plank day! Choose a day to do a plank once an hour. Be sure to use a timer to help you remember. Choose sit ups, wallsits or something else, if you prefer. You’ll be surprised how much it helps move the day along while you squeeze in strength-building resets.
4. When possible, try to combine news catch-up with time that you are answering simple emails.
5. As you can, take advantage of the amazing, free online-learning options. I’ve found worthwhile options through my library online, Instagram, email newsletters, listservs and trials of usually expensive training portals.
6. Keep water next to you. Either have a tall glass that holds more water (to keep you more hydrated without forgetting) or use a smaller glass that prompts you to get up to refill.
7. If you have to review longer documents or news emails and it can be done on your phone, use those minutes to pace around a room, hallway or around the block. (Obviously, maintain social distance and wash your hands thoroughly if you have to touch any door handles or buttons.)
8. Incorporate inspirational photos or quotes into your workspace, whether by moving frames over to your new primary spot, updating your desktop, using a colorful sticky note, or writing a dry erase marker quote on your fridge or bathroom mirror.
9. Invest in blue-light glasses to help protect your eyes from all of the screen time.
10. If you don’t need to be on video, whether during or after work, use the call-in only option on Zoom, or close or otherwise focus your eyes while listening to a Facebook Live or webinar. Give your eyes and brain a break from the useful but weirdly exhausting video call era that we’ve emerged into.
11. Set recurring alarms to shift positions, refocus your eyes every twenty to thirty minutes (extra screen time means more eye strain), roll your shoulders, and/or take belly breaths.
12. Check in with coworkers just to say hello. Remember when we used to all say hello on the way in or in the break room? (I miss that!)
13. Reserve special tea, coffee or treats for when you are struggling and work to truly savor them. I’ve realized that my default was eating too quickly so have been working on chewing well and taking smaller bites to prolong the deliciousness.
14. Without my beloved standing desk options from my recent offices, I was experiencing too-frequent spells of numbness, tingling and backaches. And then, my boyfriend and I made one by stacking a board game box on top of a printer on the kitchen counter. As I finish this blog standing, I can already say that it has made such a difference. If you want to invest in a more legitimate option, I loved having this Vari converter at my last job.
15. Adopt various music themes to spice up the days: Taylor Swift day, retro playlist day, Macklemore day, musical day, Tim McGraw day, Beach Boys day and several (irreverent but weirdly stress-relieving) days of the “COVID-19 Quarantine Party” Spotify playlist.
16. Appreciate any meeting-free hours or days by joining me for “Face Mask Fridays” or whichever day suits you best.
17. Acknowledge the emotional “penthouse days” and the “dungeon days”. On the dungeon days, take a deep breath, work to reset and try your best to “win in the dark”. (Thanks, Lucas Jadin of TRAIN2BCLUTCH for sharing in the DMV Running Clinic!)

I hope these ideas help you keep things lively and productive for as long as you can during the #quarantinelife. Let me know if you have any additions! Thanks for reading.
Posted by Jpate2167 at 9:21 AM No comments: 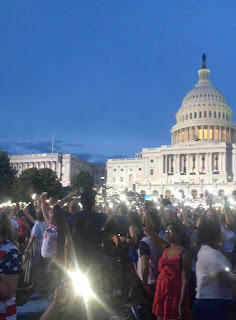 At this point, enough friends have called me their “TripAdvisor,” social coordinator, etc. and I’ve been told that “life is never boring around you,” so I’ll own it. I’m extroverted, active, seek to live life to the fullest and have had a blast enjoying tons of eclectic events in my chosen homes of Greenville, SC, Arlington, VA and Washington, D.C. over the last ten years. Here is how I’ve discovered and kept up with many of the events that bring me joy. I hope that you find some new favorites!

Feel free to share your experience and any methods that I missed. Enjoy each day!
Posted by Jpate2167 at 11:41 AM No comments:

All the best for your summer,
Jessica 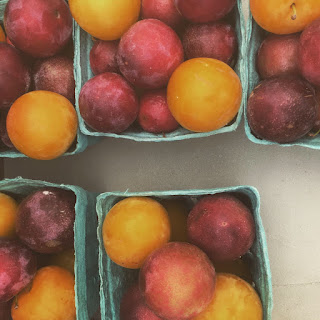